How does a person become a composer? Do you have to be a child prodigy, like Mozart was? Where do melodies come from? Composer Dayton Kinney, a doctoral student in composition at Duke University, answers all of those questions and more in a conversation about her new work, called “The Orchestra Pit.” 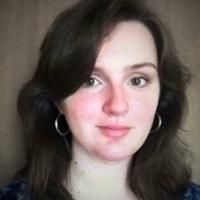 “The Orchestra Pit” is based on a children’s book of the same name by Johanna Wright. The Durham Medical Orchestra will premiere the new music on December 10, 3 p.m., Baldwin Auditorium at Duke University.

This interview has been edited and condensed.

Durham Medical Orchestra: How did you decide to become a composer?

Dayton Kinney: It was mostly by chance. Something about music had always interested me as a child. I kept asking Santa Claus for piano lessons, and finally at nine years old I began piano lessons. At 12, I began taking a college-level class.

Composition was not on my radar until after I took a college-level ear-training class. The instructor, Alla Elana Cohen, became my composition teacher. Because of a chance opening in her studio, and due to my progress in her class, she offered me a spot in her composition studio when I was 14 years old. It changed my life because from that moment on, I just wanted to be a composer and nothing else.

DMO: You hear stories about composers in history being quite young when they start to compose music, like Mozart was. Is that typical nowadays, or is it more normal for people to become composers later in life?

DK: It’s a mixed bag. There are some people who begin composition very young – at the elementary-school level. Sometimes they begin composition after they’ve had a career of performing. But for me, it happened when I was a teenager.

DMO: Are there any composers who you feel have particularly influenced your music?

DK: No, I can’t I can’t say any one particular composer has influenced me, because I take my inspiration from a variety of sources.

DK: Such as creating musical direction and gestures from everyday actions and movements in my environment. I could be interested in the way someone walks. I would watch the person walk across the street, watch how many times they stop, their pace, their breath. Maybe they’ll turn around. Maybe they take a turn to the left or turn to the right, and musically I’m creating my patterns and melodies based on interpretations of those movements.

It could also be people having a conversation and being inspired by the inflections of their voice. My music tends to have multiple different melodies and themes interspersed and interacting with each other, so that it’s almost like watching multiple conversations or actions at once. I liken it to a not-so-busy day in a cafe. You can hear a couple of different conversations at the same time.

DMO: So do you like hanging around in coffee shops looking for inspiration?

DK: Oh, it’s everywhere. Sometimes, I will be inspired by leaves rustling on a walk or drops of water hitting a piece of metal – not just the sound that it creates, but also the rippling movement of that drop of water.

DMO: How do you actually go about composing your melodies?

I tend to take walks. I think about the text. Or, ‘what is an interesting tune that would catch someone’s attention?’ I try to think about them on my own, with just a piece of paper or my computer. And then I try them on the piano – a couple of different ideas. So, it’s kind of going back and forth between something that I am composing in my mind and trying it out on the piano, while trying several iterations of these ideas.

DMO: What were your goals in transforming the children’s book “The Orchestra Pit” into music?

DK: I had this in mind for children, making sure it’s accessible to children – but also enjoyable for adults.

I wanted to make sure that the moments were obvious, for humor. There are pauses. There are very poignant moments. There are jokes that children would understand and that the adults would enjoy, too.

I thought it’d be fun to do slide whistles, harkening back to cartoons I grew up with, like “Tom and Jerry” and various other cartoons from early Saturday mornings.

DMO: Are there any moments in the music that you’d like the audience to listen for?

DK: I would highlight the beginning. I am building up a sense of something silly and everyday, when the snake is going about its business and hasn’t quite gotten lost yet.

Another favorite portion of mine is when the snake first realizes that he/she has stumbled upon the orchestra pit. I love that section of creating the sense of awe and wonder, of pulling back the curtains – and the snake is amazed, and recognizes they have fallen into the orchestra pit.

Want to hear the rest of “The Orchestra Pit”? Come to the DMO’s concert on December 10, 3 p.m., Baldwin Auditorium at Duke University.